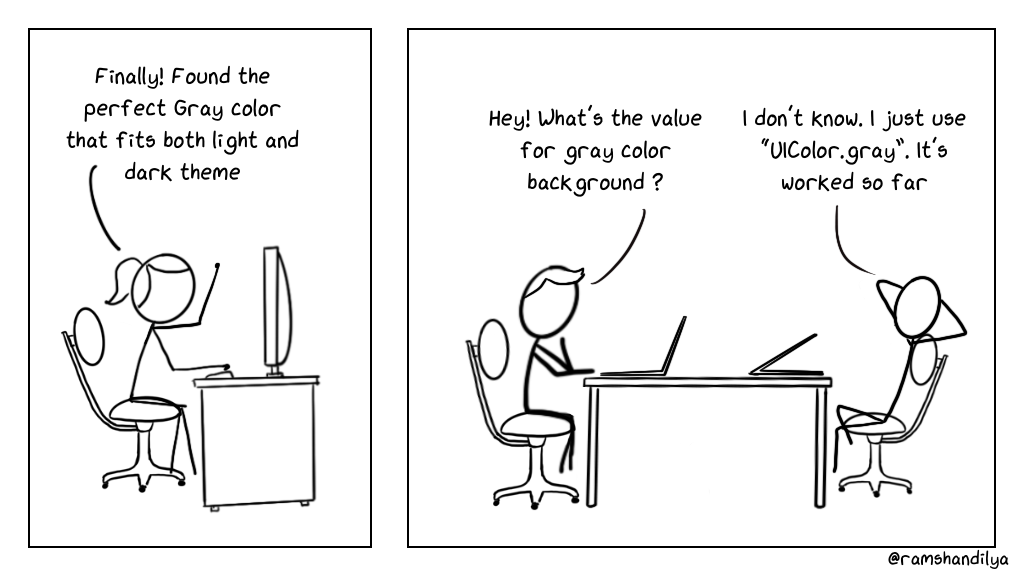 Recently, I've been working on a mobile app which was going through a major redesign. I was involved in coding the building blocks of the new design values. I started to notice a lot of inconsistencies in color and font values. While auditing, I found remains of many old font families and custom colors being set in storyboard files. There were easily ten variations of gray color. The more I worked on it, stronger I felt the need to build a core design system at the software level so that designers and engineers could speak the same language.

What is a Design System?

A design system defines the visual language of a product's design. It's a collection of reusable components, guided by clear standards, that can be assembled together to build any number of applications. Reusability enables managing design at scale.

The concept of Design System is not something new. Companies and brands have had it in different names - Design Library, Visual Language, Pattern Library, Style Guide etc. Sure, there are some differences between them, but their intent is the same - create a collection of resuable components.

Understanding not only the what, but the why, behind the design of a system is critical. Design systems can have compounding benefits -

As much as I want to delve deeper on the topic, I wouldn't want to digress. I'd rather point to some great resources on design system

Software as a continuum

Now that we have an idea what a design system is, it is clear that the standards from the design system encompasses both design and development. Unless you're rewriting the software for every redesign, code created from years ago would still require constant maintenance and upgrades. Writing software for a product is a continuous process. But I realized, as software developers, we've not done a good job at maintaining the consistency of the product language . Yes, we've had contants for colors and fonts but a design system is much more than that. It looks like we should define the entire system at the software level.

Let's look at what we can build part of design system -

So let's get started with some code. First up Typography

This is part one in a series of blog posts highlighting my experience in building different components of a design system for iOS. In case you want to jump to other parts -